Back in 2004, a young band out of NJ named Break The Chair (ages between 9 and 14) got the chance to play “Seek and Destroy” on stage with Metallica at what is now called the Wells Fargo Center in Philadelphia. This is their home video footage.

I remember this when it happened – I was watching all of the Met on Tour videos of the tour waiting for the Toronto one which I was at, and I saw this video. I got in touch with the kids cause we were roughly all the same age – I think it was probably through MySpace. We kept in touch all these years and I’m am friends with all of them. Even though I live in Canada we still will visit each other and hang out. Tom (on drums) and Andy (black guitar) are driving up to Toronto in a few weeks to see Metallica with me. What a thing to happen – because of this I have these amazing friends – doesn’t matter that we’re in different countries. 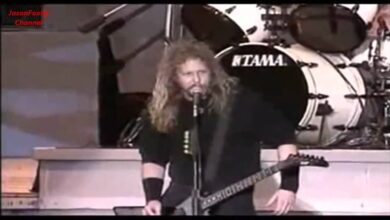 Metallica – For Whom The Bell Tolls (Live at Donington 1991)